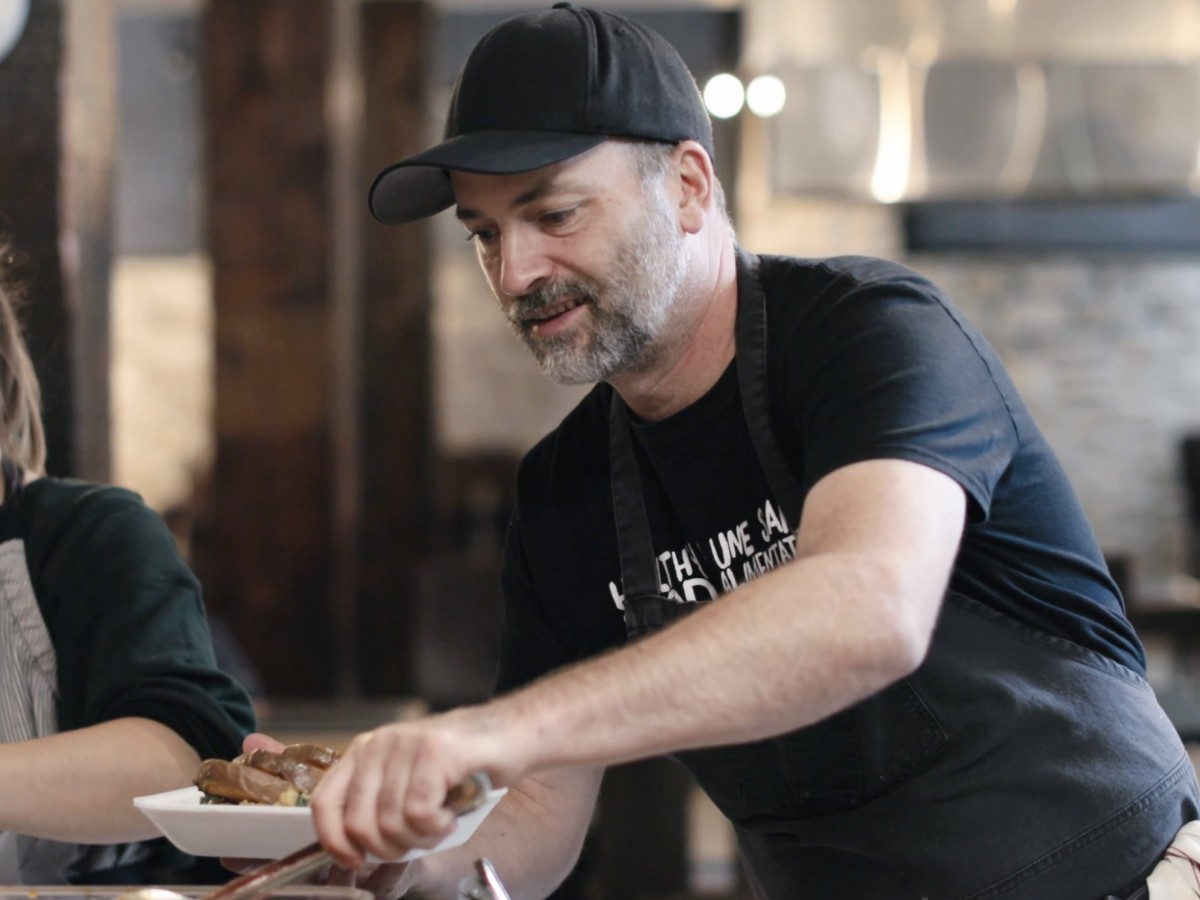 Chef Ben Kramer from Made with Love | Photo by: Devon Gray

How some businesses are supporting the community through fundraising, gift-giving and volunteering

The COVID-19 pandemic continues to present many challenges in our community, and companies and organizations rolled up their sleeves to help those in need.

“What the pandemic has taught us is bad things can happen to good people,” says Vince Barletta, CEO of Harvest Manitoba. “Your life can turn on a dime – and suddenly, you are making choices you never thought you would make. Impossible choices like paying rent or feeding your kids. Businesses closed. Schools closed. Jobs and wages were lost. Food supply chains were disrupted. Food prices soared, but so did the generosity of Manitobans.”

As 2021 comes to an end, we look back at some of the support local businesses did to give a helping hand to Winnipeg’s most vulnerable this year.

Food and more for Harvest Manitoba

The organization is currently feeding more than 83,000 Manitobans, almost half of whom are children.

“We say that it takes a province to feed a province,” says Barletta. “More than 15,000 businesses generously support Harvest every year in a multitude of ways.”

More than 90 grocery stores in Winnipeg also collect funds and food at the till through Harvest Manitoba’s Tin for the Bin program. Numerous businesses like Canada Life, BMO, Recycle Everywhere have organized additional food drives throughout the year.

Adding to food and monetary donations are more than 3,000 businesses and community groups who volunteer in the organization’s warehouse, sorting and packing food into Harvest Hampers, which volunteer truck drivers deliver to Harvest Manitoba's community network of food banks and agencies in 325 communities across the province. These trucks are purchased, leased, rented and serviced thanks to the generosity of Manitoba businesses like Manitoba Blue Cross, Canadian Tire, Maxim Truck and Trailer, Beaver Truck Centre and Penske.

“Wawanesa launched an employee giving campaign. Cloverdale donated paint to update our buildings. Contempra Steel donated product and labour for building upgrades and organized virtual events. Prairie Battery provided cash, sponsored events and donated batteries for everything from fork lifts to trucks. And we could go on and on!” says Barletta.

“We are a community of Harvest Stars, giving and receiving so no Manitoban goes hungry,” says Barletta. “If you have not had a chance to support us yet, there is still time. Donations of food, volunteer time and money are always welcome.”

An array of help for United Way

United Way Winnipeg supports more than 125 agencies and programs, helping thousands of people every year throughout our community.

Here are some examples of fun, creative fundraising by businesses across the city:

• Westman Group Inc. hosted a workplace fundraising event where its whole leadership team got pie-ed in the face. The event raised more than $16,000.

• The Royal Canadian Air Force Band based at 17 Wing Winnipeg, held a holiday concert on December 7, 2021. The concert raised $2,500 from those who were in attendance.

• University of Manitoba created a custom map with a 3km walking route at the Fort Garry campus for United Way Winnipeg’s Walk This Way event, which ended at the National Centre for Truth and Reconciliation.

• Richardson International’s Walk This Way event charted a few walking routes with volunteers to meet along the way and provided lunch for all participants after the event.

• Every year, Manitoba Public Insurance’s talented team of technicians and staff rebuild a written-off vehicle to almost new condition. They then donate it to one of United Way’s agency partners at its fall kickoff.

In return, United Way Winnipeg made an indelible impact.

“This year, Clan Mothers Healing Village was the recipient of a van which was very much needed for this agency to expand in the work they are doing,” says Connie Walker, President & CEO of United Way Winipeg.

“2021 was by far the most challenging year for fundraising across the board, with a global pandemic and economic recession creating a tough reality that at times felt like an uphill battle, but our team dug deep. Together, we rallied to raise precious dollars that will provide critical and basic supports to so many in need in our communities,” says Janice Harper, Executive Vice President, People and Culture at NFI.

Birchwood Automotive Group had its largest United Way fundraising campaign this year. The dealer group hosted a drive-in at Assiniboia Downs to thank all its staff and to promote Birchwood's 2021 United Way campaign. The family event is a creative way to thank employees for all they do for the community.

Winnipeg Chamber of Commerce organized a collection drive at the State of the Province luncheon and asked attendees to donate socks.

“The response was overwhelming. We received over 850 pairs of socks which were equally distributed to Resource Assistance for Youth (RaY), Main Street Project and Macdonald Youth Services,” says Walker.

The Winnipeg Regional Health Authority main office hosted a 50/50 raffle, and the winner donated his winnings back to United Way.

RaY hosted a pancake breakfast. Breakfast was made possible thanks to the guidance and culinary expertise of Chef Pete, RaY's Kitchen Coordinator, who was in the kitchen at 4 a.m. to prep for the big day. Youth from RaY's Level Up! Employment training program were also hard at work to ensure staff and volunteers could enjoy a generous serving of food.

“This year, as the pandemic drags on and its effects are being felt in agencies across the city, it’s more important than ever that Winnipeggers come together to support our most vulnerable citizens. From hunger to mental health, we can all help by giving what we can,” says Greg Bieber, volunteer United Way Winnipeg Campaign Chair.

Winnipeg is Made with Love

Chef Ben Kramer Custom Catering started its Made with Love charity at the beginning of the pandemic to provide nutritious meals to those in need. Chef Ben Kramer and his colleague, Chef Harold Mitchell, partnered with Community Food Centres Canada to start a campaign in Winnipeg.

“We thought we’d do it for a month or two. We put a call out for some donations and next thing we knew, lo and behold, almost two years later we’re still going,” says Kramer.

As of December 2021, Made with Love cooked and packed more than 86,000 meals. Kramer says it’s all thanks to support from not just large companies but individual Winnipeggers’ contributions.

“I still have somebody every few weeks send us 20 bucks,” says Kramer. “Every penny counts. It’s not all big cheques that drive this. It’s a lot of little ones. That $20 donation every two weeks obviously coincides with somebody's payday. There are certain individuals who are donating over and over again, and that’s just beautiful.”

Jenna Rae Cakes chose Made with Love as the cake company’s Charity of the Month. A special cookie was created with some proceeds going to Kramer’s cause, while another Winnipeg business, The Fitual, donated proceeds from its Saturday fitness class.

“Some people are dealt a good hand and some people aren’t. So, I think it's imperative that if people can help, either from a financial point of view or an ability point of view, they should help those around them,” says Kramer.

A community that gives

These stories are only some of the thousands that happened in 2021. But the bigger story is how Winnipeggers, no matter the hardships they were facing, still found ways to give back.

“Even as they were suffering economic losses themselves, local business, producers, and farm families stepped up to ensure that every single Manitoban who asked for food support got it,” says Barletta. “Every tin in the grocery store bin, every hour volunteering in our warehouse, every dollar contributed helps feed hungry children, hardworking families, struggling adults with chronic illness, seniors on a fixed income, students, refugees and more.”

To learn more and donate to these local charities, click on the links below: